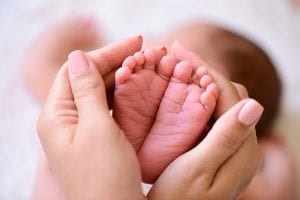 In Loving memory of my Daughter ….

Celine, my daughter, was born on September 28th 2004. During all my pregnancy, I had the creepy feeling that I was never able to explain to anyone, not even my doctor. I used to ask my little baby if she was ok while in my womb. I always felt that she was weak and suffering over there,  yet it was just a feeling since the results of all the  medical tests during my pregnancy always looked good. 9 months in and I was suffering in silence and waiting for the moment to hold her and hug her and smell her to make her feel safe and warm as I was sure that she was in pain.

September 28th 2004: I was crying hard during labor, not because of physical pain caused by delivery; I was crying because of the pain that was ahead of me. I heard her cry like any new born baby. I held her tight in my arms to make her feel warm and safe, as if I wanted her pain to be projected on me as I could handle more ache like any mother who struggles just to see her child happy, in peace, safe and healthy. In fact, I have never thought that the only thing a mother can’t give to her child was health.

An hour later, three doctors entered my hospital room and clarified that Celine was not born healthy. She was suffering from Tetralogy of Fallot!

Fifteen years ago, smart phones were not available to check what was that “fallot “ thing  they were talking about. They briefed me about her case, which was very critical. To me, with my new born baby, it was difficult at that moment to understand all the details and procedures to be followed as of that moment. Yet, facing  this reality was the  only choice I had, even though it  was tough and ugly.

I had to be strong  in order to  fight for Celine’s health with all my capacity and give her all that I could give, even if my life depended on it. I believed that holding her and touching her soft skin and hair was helping her to be in peace. I used to ask her if she was afraid of losing me as much as I was afraid of losing her; if she was suffering from the heartache as much as I was suffering.

Among all the treatment procedures, there was one special thing the Doctor advised me to do, which I adored doing for thirty-one days. He said I should monitor her 24 hours per day and keep an eye on her. In case her  skin color changes, I  need to take her to  the hospital immediately. I used to relish and enjoy her beauty by looking at her all those hours, yet the ugly truth was that I didn’t have any promise to see her grow.

Every minute was a hazard and all these questions used to hit me: “What if I lose her now? For how long will she survive? Will I see her growing up? Will I play with her and read stories as I have done to my son? Will we all play together? Will she….? Will we…? I didn’t have any answers for all the questions crossing my mind. So many questions with no answers!

October 28th 2004: while I was looking at my little baby girl, I noticed her skin color was turning blue. I asked my mother, who was next to me all the time, if she also noticed any change, and deep down I wanted her to tell me that she was ok and looked good. The truth was that Celine was not ok. We immediately took her to the hospital where the doctor decided to proceed with the operation, instantly.

I talked to the doctor  with frozen tears in my eyes, and asked him what was the risk and what about the results and what would follow…?

“I can assure you 90% that she will survive the operation -that will last eight to ten hours. After the operation, however, and for the next 48 hours, I have no idea how her body will react and adapt, dear”, he said, clearly, while he put his hand on my shoulder as if trying to ease my pain.

Eight to ten hours and then 48 hours passed, which felt like eternity to me. I had to be braver than I was to fight for my little girl, holding a tiny hope in my heart  to hold her again and kiss her beautiful  blue cheeks.

Hours passed, and my heart was beating with hers as if the doctors were operating on my own heart, until the operation room door opened and I saw her! Actually, I was not able to see her among all the medical equipment she was surrounded by. This particular scene was imprinted in me…and that was it! I was not allowed to stay with her because she was one month old and needed an isolated room.

The nurses and the doctors were really supportive and gave me their direct numbers to communicate with them anytime during the night. I was calling them every 30 minutes and they were telling me that her state was stable.

October 29th 2004:  I called the hospital at five in the morning, the moment I felt that I lost my little baby; her heart had stopped beating, but mine continued. The nurse was shocked when she heard my voice and was confused about what to tell me. I was crying because I was sure that it was over!

Was it the end? Did she really leave me? How come? Why? Tons of questions in my head and again without any answer!

I have faced many challenges and difficulties in my life, but trust me, burying my daughter was the ultimate challenge. Even if she was only one month old, the bond between us was extraordinary. My lips kissed her cold and white cheeks for the last time. My tears were flowing all over her; I was holding her dead and cold body as if I could make her feel warm. The most precious and harsh moment in my entire life was very hard to express, and translating my feelings into words was even more difficult.

Days, weeks, months and years passed by; I realized and understood that she didn’t leave me, that I didn’t lose her and we were not separated. On the contrary, she is alive inside of me and our hearts always beat together. Hence, no more questions were hitting me, because my feelings went beyond all answers.

Celine taught me to be a strong and courageous woman. The pain I lived during that month was pure agony, but it led me to take firm decisions in my life with a brave heart and without fear.

Yes, Celine was born with a weak heart but she inspired me immensely. The soreness I lived transformed me into a brave woman that faced and endured difficulties without fear and even with enthusiasm.

Celine was and still is my inspiration ….