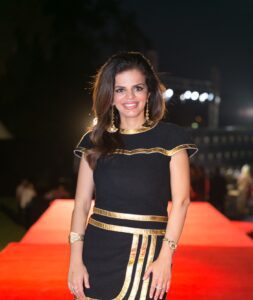 Who is Zeinab Bashier?

Zeinab Bashier is a telecom engineer from Egypt, founder, and president of the We Love Egypt For Development Foundation.

Why did you call it “We love Egypt for development foundation”?

I chose this name because I see a lot of development happening in Egypt. I see growth and new projects and at the same time, I am very involved in creating awareness for the kids and the youth. I also believe in the important role of women nowadays, so I decided for this foundation to be a big umbrella covering all aspects and fields inside Egypt as well as Egypt’s relationship ties with all the region and international countries. We focus on promoting strong and healthy external affairs for the country.

What is the main purpose of the foundation?

The main and most important purpose of the foundation is creating awareness, promoting culture among the Egyptian society, and strengthening the relations of Egypt with the rest of the world on the socio-cultural and scientific levels.

What is the role of women in Egypt?

In today’s Egypt, Women are playing a bigger role during the mandate of our great commander-in-chief, His Excellency President Abdel Fattah Al-Sisi. I always say that this is the Golden Age of women in Egypt because our president is reshaping the country with necessary economic reforms that have generated positive growth as per international credit rating institutions. Also, during his term, we have faced a global pandemic that he was able to manage successfully without a full country lockdown but by balancing between the citizens’ needs and the reforms.

Our president has also taken several actions and allocated a big budget for healthcare and the well-being of the civil society, as well as investing in the country’s infrastructure, creating an upscale transportation network to facilitate international investment in Egypt. He is offering us, women, plenty of opportunities in different fields, from ministers to deputies, public prosecution judges, governors, deputy governors, and executives, all playing a big role in our country’s government, not to mention that the number of seats for women deputies has increased during our president’s term.

Here in Egypt, women are empowered to take part in all important jobs and are acting in issuing the new laws to support gender equality and preserve women’s rights. For the first time in Egyptian history, there was a military funeral for Mrs. Jehan Sadat – wife of war and peace hero, President Anwar Sadat.

Since when did you have this ambition and clear objective?

Since I was a young girl, I was always happy to participate, contribute and play an impactful role in bettering my society, by bringing happiness to the people around me, helping them as much as possible, sharing their joys and successes, and creating awareness for children so that they can see and sense the existing and surrounding positives.

Now that you are starting to build new international relationships, why did you think of France?

I have already initiated connections with other countries, for example between the Egyptian and Saudi women. I always make it a point to attend the Cannes Film Festival to which I was invited in 2019 by one of my dear friends to attend the Monaco Forum. I had the chance to speak to the president of the Forum and he asked me back then to be their ambassador to Egypt.

I then invited the Monaco Forum to Egypt to highlight the role of women and their empowerment in the country, in the presence of Her Excellency Minister Ghada Wali, Minister of Solidarity, and Her Excellency Minister Nabila Makram, Minister of Immigration and Egyptian Expatriates’ Affairs, as well as Her Excellency Minister Yasmine Fouad, Minister of Environmental Affairs. Mrs. Wali highlighted the projects that serve and provide jobless and homeless Egyptian women with a fixed income and shelter, while Mrs. Fouad showed the attention and effort Egypt is putting towards a better environment on an international scale by promoting and pushing the use of renewable and green energy. The Monaco Forum was amazed by the organization of this event that was held by the pyramids and was very happy to attend.

When you speak about Egypt in front of all the foreigners and Europeans, what reaction do you get from them?

First of all, I am always very proud to talk about my country and the achievements that our country led by His Excellency our President Abdel Fattah Al-Sisi. I am proud of all the initiatives our president takes in order to keep Egypt on the international scene and always makes me proud to be a citizen of this historic country. I always get positive reactions from everyone since we are able to show them the historic and very important culture we have.

What is needed for your foundation to advance and reach new heights?

I am always interested in strengthening the relations between Egypt and the rest of the world through the foundation and especially our historic ties with France. The Egyptian civilization is always available and highlighted in France and as Egyptians, we love the French and we feel close to them and we adore their culture. I personally have a lot of French friends such as Jean-Daniel Lorieux and Hermès’ Michael Coste, Head of External Relations, whom I recently invited to Egypt in 2020 to spend the New Year, where he visited the pyramids for the first time in his life, and we spent time in Sharm El Sheikh and the Red Sea. He was mesmerized by what the country offers and the activities he was able to do, from snorkeling to desert safari. He also met the South Sinai Governor who presented him with the key of the city.

I know that you visited the mayor of Cannes. What is the purpose of your visit?

I made sure to meet Mayor David Lisnard. We had an exciting conversation about both the Egyptian and French civilizations, especially that he just wrote a book about civilizations and culture. I was very happy that he dedicated one of his books to me and wrote at the beginning “Vive L’Egypte” – Long Live Egypt – a proof of the strength of the Egyptian and French relationship, and there will – hopefully – be a collaboration between Cannes and the Egyptian cities.

Last month, I visited the Andrea Bocelli Foundation in Florence and met with Veronica, his wife, to exchange our expertise. She spoke to me about her passion for Egypt from the time she was a little girl coming with her father to dive in the Red Sea, which is considered the most beautiful diving destination in the world.

Do you believe that the Arab world can help your foundation succeed?

Of course! Egypt and the Arab world have always had strong ties and it makes me very happy to collaborate with our brothers from the Arab countries. As I previously said, I have started a collaboration with the Saudi women and I strive to push for enhanced and strong alliances with the rest.

As an empowered woman, what was your contribution to Egypt?

I always work on encouraging women in all fields. I have organized an event “Made in Egypt” at the Air Forces Museum under the patronage of the minister of industry and the minister of planning, an event that gathered designers and artists from different fields such as renowned jewelry designer Azza Fahmy, international fashion designer Temraza, Dima Jewelry, and many other rising talents and we showcased charity and physically impaired children’s products.

We have pre-organized a competition for the physically impaired children and the winners displayed their products during the event and the ministers were the first ones to encourage them and buy from them. In Egypt, we take it very seriously to empower and encourage physically impaired kids and on a personal level, I always encourage and support “Rahma”, a singer with disabilities.

What does Paris mean to you?

For me, Paris is the definition of civilization and culture and when I am there, I am so happy as I feel it is my second home.