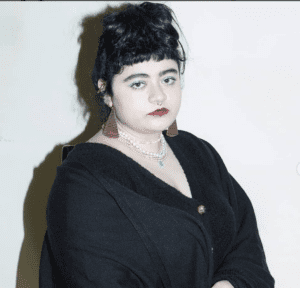 Ever since childhood, Serene expressed
a passion for drawing.
Her approach is inspired by early
Renaissance artists who sought
recognition, independence, and
individualization and affirmed their
power and freedom as artists by
painting themselves.
According to Serene, making art is
a very intimate process that is not
intended to please but to be interpreted
individually.

Whether through self-deprecation,
exaggeration, distortion, or satire,
Serene questions and tests society’s

threshold of tolerance and its judgment
of how a person should be all the while
being true to herself.
Serene Ghandour was born in 1996 in
Beirut in a family of art enthusiasts
and musicians.
In 2007 she participated in the
International Child Art Foundation Arts
Olympiad and was a co-winner from
Lebanon.

Her appetite for art was reaffirmed
upon enrolling in the Fine Arts program
at the Lebanese American University
where she won the fine arts certificate
of excellence in 2018 and graduated
with distinction in 2019.
She has participated in various
exhibitions, including the 33rd Salon
D’Automne at the Sursock Museum.

Embrace the Empowerment
Posted in INSPIRATIONAL