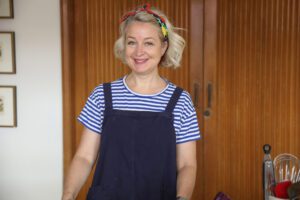 Sally Hurst is an American chef and food writer who has recently moved to Johannesburg, South Africa. She received my MFA in Creative Non-Fiction Writing at Columbia University’s School of the Arts in New York but decided her heart was really in the kitchen and so worked to receive her Grand Diplome in Culinary Arts at the French Culinary Institute (also in New York City). She ended up gaining experience in some of America’s most prestigious kitchens before moving to London where she worked as a private chef and contributed to NBC’s Today Show and Travel & Leisure Magazine.

It has been through years of living around the world and working for her catering and private clients in London, Paris, San Francisco, and even a luxury sailboat on the Mediterranean, that Sally’s style has evolved. Her recipes, writing, and food philosophy all celebrate the Mediterranean climate and its fantastic local ingredients resulting in a healthy, innovative, and – most importantly – delicious, farm-to-table approach to cooking and eating.

During her five-year stay in Beirut, Sally had a small kitchen atelier, The Pantry Beirut, out of which she taught classes, hosted supper clubs, catered, and hosted all manner of culinary events. She was also the consultant chef for Green Junkie which features healthy-ish, from-scratch food, and Super Vega, an all-day cafe showcasing farm-to-table, Mediterranean comfort food.

If you’re in Amman, Jordan you can try Sally’s twist on traditional Middle Eastern Food on the menu that she created for Her Majesty Queen Rania’s Jordan River Foundation’s restaurant Daimeh. She’s also been a Middle Eastern Food Ambassador aboard the MSS Amsterdam cruise ship and was a guest judge in the 2019 quarter-finals of MBC’s Top Chef Middle East.

Most recently, Sally was Project Manager of Empowering Women through Cooking Lebanon, a cookbook that includes the recipes and stories of 52 wonderfully accomplished women from all walks of life around the country. It’s an initiative founded by Seven Circles in Amman with a portion of the proceeds going to the World Food Program, Lebanon. The plan is to replicate that success here in South Africa with a version of the book to come soon.

Embrace the Empowerment
Posted in INSPIRATIONAL, Who Is She ?