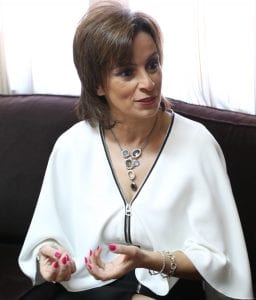 Roula is the managing partner at TEAM IN MOTION, a specialized company for team building activities, team coaching, & personal development training. She is the General Manager of Youth & Culture Center at Zouk Mikael municipality.

Holder of a Masters degree in Commercial and Industrial business Administration from St Joseph University, Roula also earned the Train of Trainers from UFE. She delivers workshops at several universities as USJ, ESA & Antonine University-UPA and is a motivational speaker.

Furthermore, Roula is the Ambassador for the MENA region of the international Organization “Female Wave of Change (FWoC). Also a board member at MEPI LAA (Middle Eastern Partnership Initiative), she is an activist in several NGO’s to empower & motivate youth and women as well.

Believing deeply that a woman can lead and be an efficient player in her country’s development, Roula is a member of BPW – Business & Professional Women International. She was the Vice-President in Parents Committee at SSCC Sioufi & member at LASIP (Lebanese Association for sports Injuries prevention).

Recently, Roula hosted a TV emission called “ #iza-baddek” (which means #if-you-want), an awareness program giving the choice for people to change in their skills and shine from within. She, additionally, gives coaching tips at OTV as part of her bi-weekly TV interventions.

Subsequently, Roula’s mission is to create awareness in the community, highlighting the importance of teamwork and communication in our daily life on personal and professional levels. A loving wife, and a mother to three children, Roula’s hobbies are hiking, biking, swimming and caving.

To know more about Roula, visit this link.