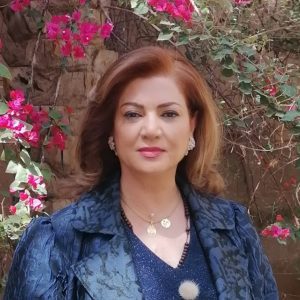 Rose Keyrouz is a nationally and internationally acclaimed and award-winning beautician. She has studied and received recognition in Venezuela, Paris, Los Angeles, Switzerland and Germany. Rose holds over a dozen degrees and certificates, spanning, skin care, face care, tattooing, paramedical tattoo, make up and cinema makeup. She has also received extensive product training from top manufacturers.

From her Media appearances, Rose endeavors to spread comprehensive knowledge on the field and had her own weekly TV show on LBC for five years. She has also appeared on several TV channels such as MBC and HIA as well as radio stations such as Delta and Jordan Radio Al Fan. She was also a certified consultant for the acclaimed Sayyidati Magazine for Seven years and wrote a regular column in Al Tob Al Badil Magazine.

Rose’s profile indicates her extensive knowledge in Beauty and her passion for this field. Hence her choice of Cara Luna after 2o years of research and training in make up.

Embrace the Empowerment
Posted in Who Is She ? and tagged EmbracingEmpowerment, ExecutiveWomen, inspiration