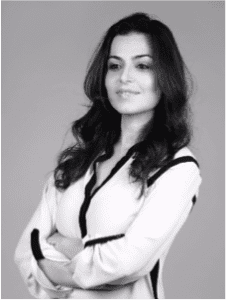 Racha Makarem is a professional translator with nearly 20 years of experience in Lebanon and the UAE. She received her MA in Translation and Languages from St. Joseph University in Beirut, where she worked as a translator for some of the biggest pan-Arab TV networks while also managing her own translation agency.

She moved to Abu Dhabi with her family in 2009 where she held the position of senior translator at The National newspaper for 6 years before founding Four Pillar Communications. Ms Makarem is involved in several writing and translation projects with government and private entities in the UAE. She has worked on research and translation projects for the Tourism and Culture Authority, The Sorbonne University Abu Dhabi, and Deloitte among others.

As a simultaneous interpreter, she has had the opportunity to work at dozens of high-profile conferences and festivals in the UAE, including the Knowledge Summit, the World Government Summit, Abu Dhabi Film Festival, the International Festival of Falconry and the Abu Dhabi International Book Fair to name but a few.

She is fluent in French, English and Arabic, and conversational in Spanish.

Embrace the Empowerment
Posted in INSPIRATIONAL, Who Is She ? and tagged advertising, communications, consultancy, languages, media, translation