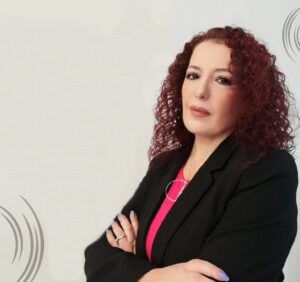 “Be confident, trust your skills and go for it ”

This way of thinking will always help you take a step forward, despite all the difficulties that sometimes make you feel like you’ve lost the way.

Nada Elias Al-Andari Al-Khoury is a poet and novelist always seeking the beauty of words. Her great passion for reading, the depth of feelings she discovered, her experience, and the influence of words, all made her career a great reflection of her persona.

The poet is a Lebanese lady resident of Qatar, holding a BA in Arabic Literature from the Lebanese university, as she worked in the field of visual and written communication & media on different Lebanese television channels.

She proved her capacities in this field after holding many positions, of which a reporter for the Presidential Republican palace, as well as her participation in covering Arab and international conferences. She has also worked as the Chief of the Correspondent Section, in addition to producing and presenting political programs as she hosted a large number of Politicians, media professionals, and people interested in public affairs.

Nada Al-Andari produced and presented social programs, shedding the light on women’s role in society through their experience in all areas of professional life, in addition to training students specializing in media on how to write news and how to deliver, speak and pronounce correctly.

This successful lady assumed the position of Deputy Editor-in-Chief of a Lebanese television channel, wrote a number of articles in various Arabic magazines, as well as revising and auditing articles before translating some of them from French into Arabic.

After moving from Lebanon to Qatar, she practiced secondary school education in various Lebanese and international schools have also developed curricula to teach Arabic to non-native speakers, in addition to participation in international workshops on the development and development of students’ learning skills.

She is a member of the Qatar Authors’ Forum and the Ministry of Culture. In some aspects, the Forum aims to raise the author’s cultural level, and disseminate the member’s output in books and journals to encourage good translation into world languages. Author Nada Al-Andari’s publications appeared in Arabic and international book fairs from 2016 until then.

Her hobbies include writing and hearing music, and her love for words prompted her to publish a poetry collection titled “لا أبالي” which means “I Don’t Care” in 2016, and ” أغار ” which means “I get jealous” in 2020, as well as a novel entitled ” فسحة ضوء” which means “A Spotlight” in 2022 through which she translated the experience of living abroad and its impact on emigrants’ life.

Nada Al-Andari is currently preparing to publish a new novel. She is also participating in many literary councils held in Doha within the framework of the cultural renaissance sponsored by the State of Qatar.