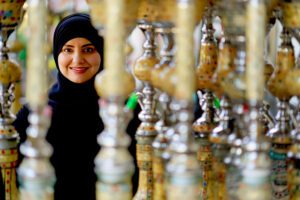 Born to a traditional Emirati family, Mona hails from the magnificent mountain area of Ras Al Khaimah – one of the seven cities in the United Arab Emirates – where she grew up and completed her schooling, acquiring later on her pre-graduate from the Higher Colleges of Technology – Ras Al Khaimah Women’s College in 2004. During her college years, she also volunteered as a host in the One & Only Hotel Chain and completed her internship in Hilton Ras Al Khaimah, where her interest and passion for the industry grew. She then moved to Dubai in early 2005 and was among the very few UAE nationals who have pioneered in the hospitality industry which was a rather unpopular career path for Emiratis at that time. Her first assignment with the iconic “Burj Al Arab” hotel was a fascinating learning experience and her door to a world of glamour, endless discoveries, and astounding challenges.

In January 2008, Mona stepped out of the hospitality industry for some time to focus on self-education. She has since embarked on a lifelong learning journey where she has worked for Zayed University while earning several professional certifications and a dual MBA in Human Resources and Operations Management.

In May 2012, Mona joined the hospitality industry again, this time, as a Human Resources Manager in Grand Hyatt Dubai where she was responsible for overseeing the day-to-day HR operations as well as formalizing and executing the Emiratization Strategy for the hotel. She kept pressing forward through managing the resistance of line managers to hire local talent by visiting colleges, universities, and career fairs to attract potential Emiratis and promoting the local culture in Grand Hyatt Dubai. During her 2.5 years tenure in Grand Hyatt Dubai, Mona doubled the number of UAE Nationals from 17 to 35, accomplished her PMP and CIPD certifications, got shortlisted as “Best HR Person of the Year” in Hotelier’s Middle East Award 2014, and received various appreciations and accolades for her contributions to supporting Emiratization in the hospitality industry.

In December 2014, Mona was appointed as a Director of Human Resources in Jumeirah Creekside Hotel, part of Jumeirah Hotels and Resorts, the luxury hospitality brand in UAE. In that position, she was the only Emirati woman in the Executive Committee Team of the hotel. She has, ever since, transformed the team in the HR department and introduced several HR initiatives to uplift the employees’ performance and engagement scores and support the business results. In August 2017, Mona got promoted to the post of Director of Human Resources in the majestic Ottoman-inspired Jumeirah Zabeel Saray resort. In April 2019, Mona was awarded the highest status in the HR profession from CIPD which is the FCIPD (Chartered FCIPD).

In addition to being an accomplished hotelier, Mona is also a success coach and a published author. She published her first book titled “Beat The Odds” or “المألوف اكسر” in both Arabic and English wherein she shares her tried and tested techniques and success secrets with working women and especially hoteliers to help them achieve success by adding value throughout their working life.

Moreover, Mona is a member of several professional bodies such as the Project Management Institute (PMI), the Chartered Institute of Personnel & Development (CIPD), and the International Coaching Federation (ICF). Furthermore, Mona is a member of the Advisory Council in the Dubai College of Tourism. She is a blogger and publishes periodic articles in LinkedIn and Brainz Magazine on her life experiences and areas of expertise such as Human Resources, Coaching, Leadership, Self-Development, Emiratization, Hospitality, Women & Youth Empowerment, etc.

Mona currently continues adding value to the community through her unique coaching program, workshops, webinars, and writings. She has recently launched 2 exclusive career talk shows on YouTube, one in English (Beat The Odds in 1 Minute) and the other in Arabic (مهنية افكار) to provide useful career tips and advice to help individuals look differently at their career and make the most of it.

To know more about Mona’s inspiring journey, visit this link or click here.