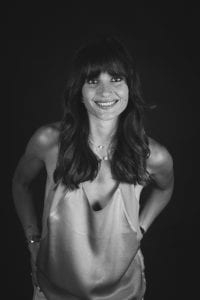 What helped shape the woman you are today?

I think Lebanon itself played a big role in the path I took as a journalist and as a woman. I lived my life witnessing all sorts of injustices and conflicts, it pushed me to use my voice to empower others. I also owe it to my father who was my role model growing up, he was always at the service of others as a surgeon and later as a politician, he showed me what it takes to achieve your dreams and what it was like to fight for what you believed in.

What is the best advice you received, both personally and professionally?

Accepting things I cannot change and changing those I have the power to change.

Can you talk about a woman who has greatly influenced your life? As a journalist, can you name one person in the field whom you highly regard and admire?

I am a huge fan of Frida Kahlo and I see a lot of myself in her. I admire her rebellious spirit, her feminism, her passionate love, and how she managed to transform her pain into beauty.

I look up to a lot of women in journalism, such as Lyse Doucet from the BBC, Clarissa Ward from CNN, Giselle Khoury – now with Skynews Arabia.

What are your thoughts on Women Empowerment?

I think it starts with women first. Women should stop expecting others to empower them, namely men. Our journey starts within first.

What are your proudest accomplishments in life in general, in your field as a journalist in particular?

My career for sure, having been able to give a voice to a lot of marginalized communities through my stories. I am also proud to be the laureate of the Samir Kassir Award for the Freedom of the Press in 2020.

How has motherhood affected your professional journey?

It has made it even more difficult to seek a balance between personal and professional life. In many ways, it also increased my guilt, leaving my daughter all day for work, traveling, not being around all the time, that is not easy. It has also made me even more sensitive when reporting on children and vulnerable people. I also think that having a daughter makes me want to be an even better journalist, setting an example to her, showing her that her dreams can come true, that she should pursue them no matter what they are.

What are your thoughts on the ethics of Media in Lebanon and internationally?

Unfortunately, media ethics is very low in Lebanon if not absent. Our media outlets still prioritize getting a scoop, rushing with publishing information without proper fact-checking and validation, exposing vulnerable people without any consideration of protecting them, and following political money and agendas.

Women and men can both get exposed to sexual harassment and abuse. In your opinion, which gender is more exposed to such actions? Who is responsible for prosecuting the perpetrator and protecting the victims from all forms of abuse?

Women are definitely more vulnerable, we live in a patriarchal world, everywhere. Women are still objectified; our bodies are still seen as means for men to get pleasure, as baby making machines, as something that needs to look good for others. Perpetrators should be prosecuted by law and survivors protected by law and by state institutions, but unfortunately, we rarely see that. Women often lack the tools to report abuse and the legal protection.

Where does the responsibility of journalists lie in raising awareness on these issues, while safeguarding the victims from any risk or threat?

I think the journalists play an important role in raising awareness on gender-based violence through the stories they tell, by exposing the violence and the injustice but also by seeking to protect the survivors and helping them if possible.

What is the importance of raising awareness on the role of Media in defending Human rights? And do you believe we should push for more collaborations between the Media and NGOs to pave the way for a better society?

The media is powerful and can impact public opinion and policy makers. It has played an important role in the past in lobbying for certain laws and exposing abuses and it should continue doing that. It should give its platforms to any entities working on advancing human rights.

How can a journalist separate their emotions and personal preferences from their duty?

This is one of the first things you learn as a journalist, especially if you go to journalism school in the west, but it is really difficult to apply on a daily basis. You strive to keep your emotions aside but we are humans at the end of the day before being journalists. I always say one should speak from their heart and with passion, that is not wrong, as long as you uphold the truth. Then one should try as much as possible to delay processing their feelings when on assignment, but that does not mean we don’t process them. There is a time and place for that.

What experience did you gain through covering conflicts on an international level? What was the highlight of this experience?

I gained experience covering mainly displacement resulting from wars and conflicts. I was a regional video producer with the United Nations for about four years. I covered more than 10 countries. The highlight was the war of Mosul in Iraq which I covered during and after the conflict. This experience taught me how to navigate a warzone, implement what I learnt in my security training as a journalist, tell stories of conflict and displacement with a focus on the human stories. It taught me how to recognize the limits of what I can and cannot do in similar tough environments.

What makes a good journalist in your opinion?

During your participation in “Women on the Frontiers” conference you discussed the role of Media in fighting Gender-based violence. What has been your role, as a woman in the field yourself, in raising awareness and empowering others in the process?

I have extensively covered stories of gender-based violence, from domestic violence to migrant women abused under the Kafala system to Yazidi women survivors of Isis, girls survivors of sexual abuse, and more topics. And in telling those stories, I always made sure that the survivor’s well-being came first, that they were protected and not just being used for a story.

Many journalists face violations of their rights especially in the right of Freedom of Speech, how do you work to defend this right and what is the importance of the law in protecting Journalists rights?

I speak up whenever I need to and nothing deters me from telling the truth, it’s what I signed up for when I chose to become a journalist. I also use my voice to defend that of others including those whose right to speak is violated. Journalists in the Arab world are being subjected to all kinds of violations and oppression. We don’t just need laws to protect us but we also need these laws to be implemented and people held accountable for stopping us from doing our work.

I think in many ways it’s a natural skill, some people have that confidence in them naturally and some people don’t. But for those who want to be public speakers and might struggle, I just say it gets better with time. Practice is key, start small – with a small group –  practice alone, work on that confidence, use your own voice and language and not that of others, start with notes on a paper but later on just take this as a discussion, you don’t have to follow your speech word by word, speak from your heart, interact with your audience.

To know more about Dalal, visit this link.