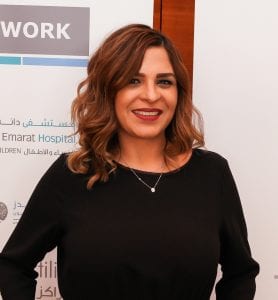 Listed in the “40 Under 40” list of seasoned executives and young leaders in Arabian Business in 2019, and as one of the top 100 most influential PR professionals in the Middle East in the 2019 Power Book of PR Week UK, Farah Al Alami holds an MBA (with distinction) from New York Institute of Technology (NYIT), and a Bachelor’s Degree in Marketing from the Yarmouk University in Jordan.

With over 16 years’ experience in healthcare communications and PR in the Middle East (ME) region, Al Alami currently serves as the chief communications officer at United Eastern Medical Services Group (UEMedical) in UAE, leading the marketing and communications functions on a corporate level and throughout UEMedical’s subsidiaries including Danat Al Emarat Hospital, HealthPlus Network of Specialty Centres, Moorfields Eye Hospital Abu Dhabi and several other projects in KSA.

She is also an elected strategy board member at the Middle East Public Relations Association (MEPRA), a non-profit member association established to set world-class standards for the public relations and communication industry in the Middle East. It has operated since January 2016.

From 2013 to 2016, Al Alami served as the regional director of communications and PR in the Middle East region, Turkey and UK for US-based Cleveland Clinic. She previously led media relations and internal communications at Abu Dhabi’s tertiary hospital Sheikh Khalifa Medical City from 2005 – 2011 and in between, she joined UEMedical as marketing manager for two years.

Al Alami was invited to present a health segment in a weekly medical TV show (Fi Baytina Tabeeb) on Abu Dhabi TV Station from 2012 until 2014 with over 55 aired episodes and reports aimed at promoting healthy lifestyles.

Al Alami has also served as committee member in the Women in Business Committee under the American Chamber of Commerce Abu Dhabi (AmCham Abu Dhabi) from 2017 – 2019.

To know more about Farah, visit this link.