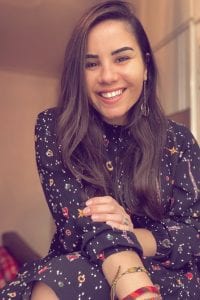 Since 2013, Dima’s volunteering experience has really made a positive impact on her life in general, starting with the coolest place on earth: Borneo, Malaysia. During that time, Dima learnt so much on how she can make a difference in a community. She also firmly began to believe that she could use her talent (which is making bracelets) in order to support her choice in volunteering in different parts of the world.

Dima was becoming a person who could speak the language of her mission in order to get people to support and learn how, they too, can make a difference. She has worked on many different projects in countries around the world like Borneo, Malaysia, where she took part in building an educational centre, a kindergarten and an environmental rejuvenation project in the Bornean rainforest.

Working alongside the community changed Dima’s perspective on life forever. Since then, advocating for children and youth has been her passion. In addition, she has worked in countries like Lebanon, India, Ecuador, South Korea and many others for empowering and helping build sustainable projects.

Dima has been interviewed on several TV channels, such as MTV, where she  shared her journey with fundraising and advocacy-which boosted her confidence and taught her that change can be achieved.

Moreover, Dima has worked with a number of celebrities who have worn her bracelets, such as Jean Claude Van Damme, Monique Coleman, Love Island’s Laura Anderson and many more supporting her cause and projects.

Team DIMA Global is about inspiring others to volunteer and become agents of change, encouraging them to help one another, get out of their comfort zone, and explore the world.

“The main prerequisite for volunteering  is that you must have the heart to do it. At Team DIMA Global, we mostly focus on underprivileged people from all around the world who are missing some basic needs. We then help build sustainable projects along with the community to give them a chance for a life with no limits”.

DIMA Bracelets of Change is made by Dima herself, and girls and boys in different parts of the world who not only learn vital skills during their knit and chat classes, but also use their time during mentorship programmes to learn and be a part of the change.

*All funds generated from the sales of bracelets go to Team Dima Global’s projects in Kenya, benefiting the schools and improving numerous lives.

Embrace the Empowerment
Posted in INSPIRATIONAL, Who Is She ? and tagged Humanity