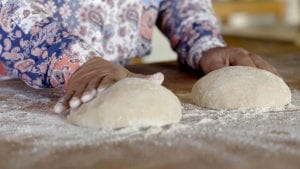 On October  6th, NGOs, doctors, and influencers,  all published a bread recipe video, asking a simple question “Have you baked bread?”. At first glance, this video looks like any other bread recipe, but it actually offers a double reading: the gestures used to prepare the dough are the same as those used for a breast self-exam. The Lebanese Breast Cancer Foundation and the American University of Beirut Medical Center (AUBMC) have called upon popular traditional baker Um Ali to perform these gestures and encourage women to follow them to perform a breast self-exam.

Breast cancer is one of the most prevalent cancers amongst Lebanese women. It represents 22% of all cancer cases in the country and constitutes 35% of all women’s cancer. Studies prove that preventive screening and self-testing can help reduce this figure: 90% of cancer cases can be cured if it’s detected early.

But in Lebanon, traditions and cultural taboos related to intimate body parts prevent women from not only going to the doctor’s, but also from talking about the subject or performing self-examinations. “In our education, it was very taboo to discuss the body and very intimate feminine subjects.” explains Danielle Rizkallah, film director.

The Lebanese Breast Cancer Foundation and AUBMC decided to take action by creating The Bread Exam.

A traditional bread recipe to help save lives 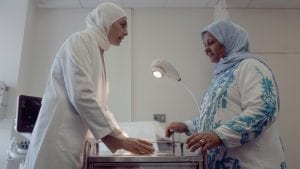 The idea was to transform a tradition into an educational tool to overcome taboos. “Since many households in Lebanon bake their own bread and are interested in this subject, we decided to use it as a euphemism and talk to women about baking bread, instead of talking about breasts, self-examination or cancer.”, stated Mirna Hobballah vice-president of the Lebanese Breast Cancer foundation.

The bread recipe video was first released at the beginning of Breast Cancer Awareness month, without any mention of the initiative behind it. Doctors, survivors and influencers shared the recipe, helping them get the gestures out there, while avoiding any taboo. After being trained by a gynecologist, Um Ali performs these three life-saving gestures while respecting our culture and women’s intimacy.

“We worked closely with Um Ali and with Ghina Ghaziri, gynecologist at AUBMC, so that all the gestures that she performs in the video tutorial are medically accurate. In that sense, the video can better serve as a timeless self-exam tutorial that can help detect breast cancer.” stated Abir Salam, Communication Manager at AUBMC. 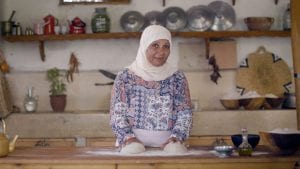 to online platforms, the bread exam self-check procedure were printed on packs of flour in supermarkets, as well on bread wrappers in shops and markets in Lebanon’s rural areas.

By shaping a taboo into a tradition, the recipe gives women the possibility to talk about breast cancer without mentioning it. Only one question remains: ‘‘have you baked bread this month?’’. #KHABAZTE

About The Lebanese Breast Cancer Foundation

The Lebanese Breast Cancer Foundation (LBCF) is a non-profit, awareness, educational, fundraising initiative established in January 2011 by Professor Nagi S. El Saghir (President of the LBCF) at the American University of Beirut Medical Center (AUBMC) and a group of women who either survived breast cancer or had close relatives surviving it. The aim of this association is to provide comprehensive support for women with breast cancer at AUBMC. Its goals include supporting breast cancer patients’ treatment, including radiation therapy and surgery, disseminating more knowledge and awareness about breast cancer, promoting systematic and programmed early detection campaigns, and supporting breast cancer research projects and clinical trials.

Since 1902, AUBMC has been providing the highest standards of care to patients across Lebanon and the region. It is also the teaching hospital for the Faculty of Medicine at AUB (established in 1867), which has trained generations of medical students and physicians, and whose graduates can be found at leading institutions around the world. AUBMC is the only medical institution in the Middle East to have earned the five international accreditations of JCI, Magnet, CAP, ACGME-I and JACIE attesting to its superior standards in patient-centered care, nursing, pathology/laboratory services and graduate medical education. The Faculty of Medicine has graduated over 4,000 medical students and physicians; the Rafic Hariri School of Nursing provides excellent education for the nursing staff, and the Medical Center meets the healthcare needs of over 360,000 patient visits annually.