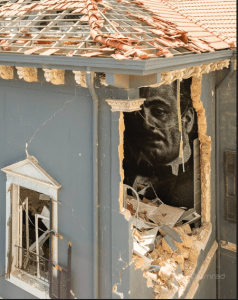 In Solidarity: International Artists to Raise Relief Funds for Lebanon

“Artists with Beirut” was born out of a heartfelt need to show support and solidarity with the people of Beirut, Lebanon in the aftermath of the apocalyptic blast that occurred on August 4, 2020 at the Beirut Port.

“Artists with Beirut” is an online benefit art auction to help raise relief funds for the 300,000 people rendered homeless from the explosion.

All funds raised will go directly to the Beirut Emergency Fund 2020, a coalition comprised of Lebanese diaspora organizations SEAL, LIFE, LebNet, Jamhour Alumni (US/Europe) and KuwaitAmerica Foundation, focused on supporting non-profit, non-governmental organizations working to meet the humanitarian relief among vulnerable populations impacted by the explosion. Funds will be disbursed with full transparency to well-vetted NGOs according to the most pressing needs, which include Shelter and Rehabilitation for households, SMEs, Medical and Mental Health. 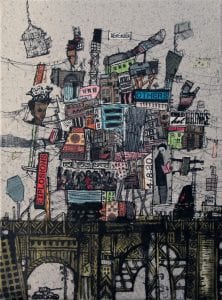 The auction will be showcased on ArtScoops, an online auction house and marketplace from September 25th to October 2nd 2020.

The architect behind the initiative is El Gemayel-d’Herbécourt, a French-Lebanese filmmaker and philanthropist based in Los Angeles. “As I watched the catastrophic scenes from the Beirut explosion, I could almost feel its tremor in my home. With my mind still reeling from the shock I realized there was something I could and knew how to do: fundraise. I immediately contacted a few artist friends and their response was heartwarming. That’s how “Artists with Beirut” was born.”

Against a canvas of desolation, the art community came together in a global show of humanitarian solidarity to raise funds for the devastated city. Like a real collage, over 45 artists from 10 cities in 7 countries donated their precious artworks to be auctioned online.

The online auction will also feature unique ‘experiences’ namely one hour ‘close up’ private video zoom call with French Lebanese film director Phillipe Aractingi as well as a one hour with film director Cherien Dabis to pick her brain on her craft or seek advice on your film project.

It has been a little over a month since the horrific explosion occurred and the need for humanitarian support is still huge.

A spokesperson for the Beirut Emergency Fund said “The ongoing drastic deterioration in Lebanon’s economic and financial situation has rendered the daily living conditions in Lebanon unbearable. The catastrophic explosion that hit Beirut has, in addition to the loss of human life and the injury of thousands, caused massive destruction.

The journey to reconstruct and to provide the Lebanese with the basic requirements for their daily life will be a long one and will require the consistent support of Lebanese in the diaspora but also Friends of Lebanon.  This auction is a noteworthy initiative that will contribute much
needed funds to our country by mobilizing the world of art.”

Art Scoops COO May Bendki Mamarbachi said “As worldwide support and love for this city in need continues, ArtScoops is delighted to be joining the relief efforts with this auction as we care deeply for those that have been affected by the disaster.”

El Gemayel-d’Herbécourt added “We trust that the international community and global Lebanese diaspora will generously support us in the same way the artists have. Every penny counts.”

For more info about the Auction, visit this link.