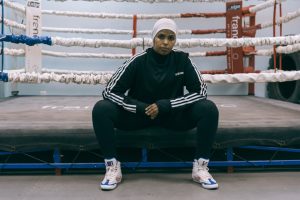 Afaaf Alqorane is Qatar’s first female professional boxer, who is changing the sports scene for women in the country. Q Life interviewed Afaaf to learn more about her dreams to represent her country in the ring, and to encourage young girls in Qatar to recognize their strength and power.

Afaaf knew she wanted a career in sports from a young age, choosing to study physiotherapy “as a way to be involved in the sports scene and help myself and other players.”

Her sporting ambitions were later inspired by Nasser Al-Aisri, a grandmaster from Oman; “Nasser is the one who created the world of boxing for women in Qatar. He is the one who took me into this world, and is the reason I stay motivated.”

Afaaf attended boxing camps in 2017 and 2018, before becoming recognized by the Boxing Federation and Olympic Committee and now representing Team Qatar in the sport. She is passionate about making an impact in the sports world, and understands the importance of ensuring that boxing has female representation and role models.

“It is hard, but everything can and will change. I hope that our community will learn more about the sport and its benefits, which are not only physical but mental.

“It is important to note that there are different types of boxing, such as Olympic and professional. I’ve hosted workshops in an attempt to raise awareness to help people understand the contrast between them. When people think of women in boxing, they also think we can be easily injured, but I try to explain it’s not always what you see on TV.”

Afaaf emphasizes the key role of training that goes on behind the sport, which has had a huge impact on both her boxing development and her wider growth.

“Focusing on exercise, eating well, self-motivation, and mental health has allowed me to face and accept many of the difficulties I come across. Boxing has changed the way I live my life. It’s like fighting in a good way, full of respect, focus, and resilience.”

Afaaf has dreams of growing women’s boxing in Qatar into a community; “I want to be a role model, and help coach and encourage girls to participate, believe in themselves, and achieve their dreams. Boxing is not about fighting with another person but fighting for your rights and dreams. Chase them, because once you do, everything has so much more meaning.”

For her, boxing teaches her to fight life in the best way possible.
Dedicated to her training schedule, she aims to become a role model to every person crossing her way.
Boxing teaches her to remain focused, goal driven, becoming more patient and most importantly to never give up.

Embrace the Empowerment
Posted in DIAMOND IN THE ROUGH, DID YOU KNOW, TEA TIME and tagged boxing, breakthebias, challenge, inspirational, leadership, motivation, sports, women in boxing