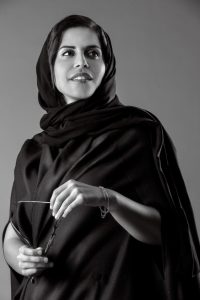 Abeer Alessa is a Saudi female entrepreneur & professional marketeer, Co-Founder, General Manager of The Bold Group and member of the Advertising Committee at Chamber of Commerce. Inspired by the art of communication & creativity of the world, Abeer began her career by obtaining a Diploma in Arts & Design from the Royal University in Bahrain, landing her first job at MBC Group where she worked as Promotion Producer for a year.

After that, she accepted a Conceptual Copywriter position at one of the leading multinational agencies, hence becoming among the first Saudis (specifically Saudi females) to join the advertising industry in Saudi Arabia Kingdom. During her time at the multinational agency, Abeer acknowledged the caliber and methods that advertising agencies were employing in the Saudi market, and identified a gap in the market for a different approach not only for brands, but for the country itself. All of this led Abeer to another crossroad, where she took the courageous decision to leave the comfort and perks of being in an international company and decided to pave her own path.

Following taking her Bold decision to register her company in Riyadh in 2010, naming it “Bold Agency”, Abeer moved to France for 2 years, to get her Master’s degree in International Marketing and Business Development, which provided her with the right skillset to get back, and activate the registered Bold Agency in the Saudi market.

Since then, the agency grew in scale and quality, accumulating tens of success stories and accolades such as “Independent Agency of the Year” by Dubai Lynx, which made Bold the first Saudi independent agency to receive this award and to be ranked among the top 25 most successful communication agencies in the world, according to The Good Report 2019, issued by ACT Responsible.

Under Abeer’s leadership, Bold Agency evolved steadily throughout the years. On Bold’s 10th anniversary in 2022, Bold Agency expanded to become The Bold Group with three independent units specialized in brand building, communication and digital experiences. The Bold Group is setting a benchmark in the region by expanding its specialized unit offerings and offices beyond Saudi Arabia, and opening a new office in Egypt. With their upcoming venture into the metaverse, The Bold Group is exploring additional digital creative platforms as the marketing sphere expands.

The Bold Group is just one of Abeer’s entrepreneurial success stories, as in 2017 Abeer became a member of the Advertising Committee at the Chamber of Commerce in Riyadh, and a member of the Saudi Women Leadership Circle at UNICEF in 2019. Furthermore, this dedicated entrepreneur is the Co. Founder/Managing Director of Teeb, a high-end lifestyle gift items company, and on top of it all, she is a shareholder in Alhasel Holding part of Alessa family business.

Embrace the Empowerment
Posted in Who Is She ? and tagged EmbracingEmpowerment, entrepreneurship, ExecutiveWomen, WomenEmpowerment, WomenEntrepreneurs, WomenInBusiness, WomenInLeadership, WomenLeaders