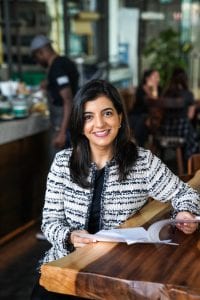 Producer; writer; advocate. Having worn many hats throughout her well-established career, Aakanksha Tangri attributes her success to never shying away from the tough topics, earning the respect of her fellow professionals and working for some of the world’s top publications and production houses.

A graduate of the University of Toronto with a B.A. (Hons) in Journalism (Specialist), Tangri received academic distinction from the journalism program in 2012. In 2013, while studying for her Masters at Columbia University, Tangri took on the role as one of the organizers and spokespeople at the renowned India Business Conference, among the ranks of Fortune 500 CEOs, scholars and Nobel Laureates. It was here which led Tangri to be exposed to some of the most influential business, political, and celebrity personas in the world.

Upon completing her Masters in South Asian Studies and International Affairs from Columbia University in 2014, Tangri leapt into the world of journalism, having begun her journey at the flagship news show for the Canadian Broadcasting Corporation – The National, CBC News in the summer of 2012. After gaining valuable experience here, Tangri then went on to a position at CNN New York, working on the weekly public affairs program, Fareed Zakaria Global Public Square (GPS).

Through Tangri’s astute ambition and passion, it was here that her analysis of the 2014 Indian federal elections was one of the top pieces globally, where it explained the players of the election, the stakes, and what the election meant in terms of India’s relationship with the United States.

In 2014, Tangri took forward an opportunity to work as a Production Assistant at VICE News, New York, and within six months worked her way to Associate Producer for Daily VICE, a position she held until 2017 in the Toronto office. Tangri’s time at VICE saw her pursue countless hard-hitting news stories, with the exciting journey exposing her to the likes of the FBI, tracking down hackers, as well as pitching and producing and often interviewing personalities such as the late Chef Anthony Bourdain, Canadian Prime Minister Justin Trudeau, and poet Rupi Kaur.

During those years, she produced over one hundred stories, worked on numerous documentaries and feature stories, and hosted on-air for the global media channel. Tangri also organized and moderated panels with Indian politicians and economists including Derek O’Brien in November 2014 in New York and Dubai in 2017 and Jaivardhan Singh and Arvind Panagariya in May 2018 in Dubai.

Having grown up in a home where education was at the forefront and conversations around tough topics were always encouraged, Tangri’s curious nature was nurtured and soon led her to explore and identify major gaps within the Middle Eastern region when it came to addressing important topics such as education, mental health, well-being and inclusion. With parents, children and teachers repeatedly offering their own first-hand experiences and stories, the spark that was Re:Set was ignited, and Tangri’s determination to forge a platform to dig deeper and open conversations on these challenges was born.

When questioned on the positive impact she believes she is making on the world through her work, Tangri humbly replies, “We have a long way to go, but I hope through Re:Set we can bridge the gap and shed light on topics such as mental health and disabilities which are still stigmatized as well as provide a safe space where individuals feel they can share their stories, have an honest conversation and feel heard.”

With a lack of information and stigma around topics such as mental health, well-being, disabilities, and inclusion, Tangri says her determination to dismantle those boundaries and open a dialogue is only the tip of the iceberg for her vision for Re:Set. It is through Tangri’s belief in the platform and it being a source people can trust that is its driving force which lead to Tangri being placed on the Forbes 30 under 30 Middle East 2020 list. Of course, for Tangri, what is most important are the people and the stories which they share, and with Re:Set in just its second year since launch, it is safe to say that Tangri is only getting started.

“Fight for the things that you care about, but do it in a way that will lead others to join you.” – Ruth Bader Ginsburg

To know more abdout Aakanksha, visit this link, or click here for more information about Re:Set.