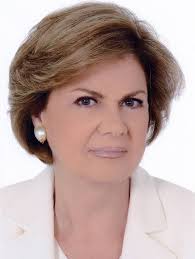 Mouna Elias El Hrawi was born in 1941 in Baalbeck, from a Palestinian father and a Lebanese mother. She was the oldest of three girls and spent her childhood in Bethlehem until the death of her father when she was nine years old. She stayed with her paternal aunt in Amman until she finished her high school studies, and moved at the age of 17 back to Baalbeck where her mother and sisters had settled. She wed Elias El Hraoui in 1961 and became Lebanon’s first lady in 1989 upon his eventual ascendancy to the presidency.

Embrace the Empowerment
Posted in INSPIRATIONAL, Who Is She ?